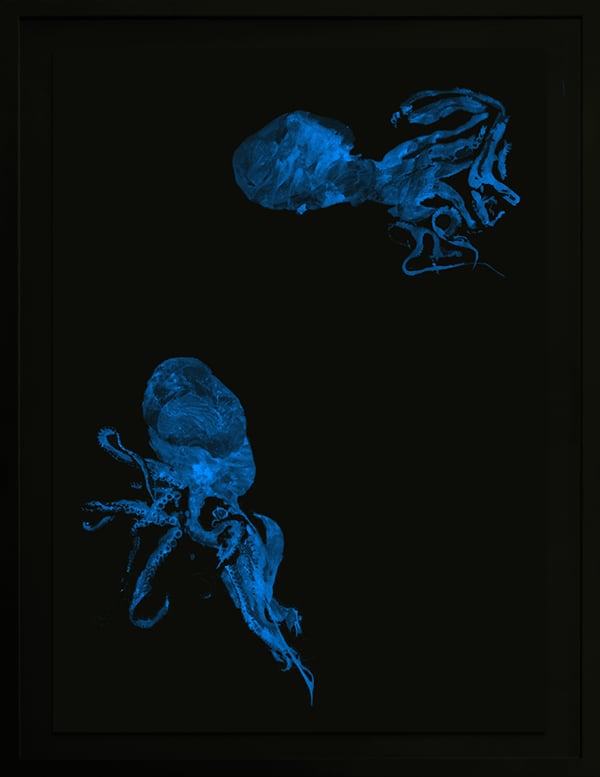 Nicolas Deshayes' limited edition Blueprint for Flints in Gluten, 2013 was produced on the occasion of his major solo exhibition at S1 Artspace. Crude Oil presents newly commissioned work by Deshayes alongside a personal selection of historical works from the Leeds Museums and Galleries sculpture collection. The two octopuses depicted here are taken from test prints which Deshayes' produced by pressing real octopi onto paper, allowing their ink to leave an imprint on the page.

Nicolas Deshayes was born in France (1983) and currently lives and works in London. He graduated from MA Sculpture at the Royal College of Art in 2009 and BA Fine Art at Chelsea College of Art and Design in 2005. Recent exhibitions include Snails, Brand New Gallery, Milan (2013); Browns in Full Colour, Jonathan Viner, London (2012); Vanille with George Henry Longly, Galerie Valentin, Paris (2012); Precursor, E:vent Gallery, London (2011) and A Killer Whale Breaching in Soft Focus with Ed Atkins, Transmission Gallery, Glasgow (2010). In late August and September he will be included in exhibitions at Centre for Contemporary Art Ujazdowski Castle, Warsaw, Galerie Opdhal, Stavanger and The Approach, London.

Nicolas Deshayes' print has been generously supported and produced by APG Sheffield.

Please note that shipping is available for unframed works only. Framed works must be collected from S1 Artspace. Shipping within the UK is £25 and to the rest of Europe is £30, more shipping quotes are available upon request.