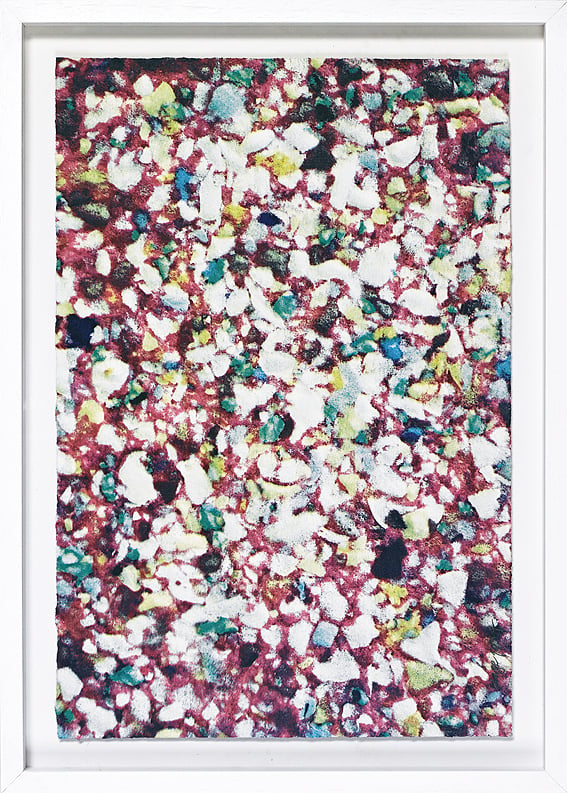 The colours and texture of the screenprint FOAM, 2016, mimic the material used to create the sculptures in The Brutalist Playground exhibition presented at S1 Artspace in 2016. Three months into the exhibition the foam began to crumble and disintegrate as it reached the end of its lifespan. The journey the material took is something the artists were keen to capture through the printing process and used a ‘dithering’ technique to create speckled half-tones that suggests its gradual disintegration.

Assemble are a collective based in London who work across the fields of art, architecture and design. They began working together in 2010 and are comprised of 20 members. Assemble champion a working practice that is interdependent and collaborative, seeking to actively involve the public as both participant and collaborator in the on-going realisation of the work. In 2015 they were nominated for and won the Turner Prize for their Granby Four Streets community project in Toxteth, Liverpool.

Simon Terrill is an Australian artist based in London who works with photography, sculpture and installation as well as large-scale public works involving many hundreds of participants. Following a BA in Sculpture and MA in Fine Art at the Victorian College of the Arts in Melbourne, he lectured in Critical and Historical Studies (2005-08) and at the Centre for Ideas (2003-08), both at the VCA. Recent exhibitions include Tilt at Sutton Gallery Melbourne, The Piranesi Effect at Ian Potter Museum of Art and Balfron Project at the National Trust’s 2 Willow Road.

To collect in person please use discount code 'PICKUP' and postage will be removed at checkout. 20% VAT is included in price listed above.